While Armagnac was produced prior to its rival Cognac, the latter took the fame cake as it was more accessible to trade ports. Cognac is located closer to the Atlantic Ocean, and just north of the major trade center, Bordeaux. Located further inland, Armagnac struggled to compete with Cognac's accessibility.

Today both produce brandy of outstanding quality, and while many toss them into the same Brandy category, there's a wide range of differences between the two spirits produced from the distillation of wine.

Generally, it can be said that:

Cognac:
Armagnac: can be more intensely aromatic, fuller bodied, and have a larger diversity of styles.

Below is a detailed look at the intricate differences between the two, from grape varieties allowed, distillation, labeling to flavor profiles.

Cognac: 6 varieties permitted, of which
Ugni Blanc is approximately 98% of total plantings. Ugni Blanc is also known as "Saint Emilion," and the white"Trebbiano"grape of Italy. Good rot resistance, and low in sugar, high in acid. This is important because when wine that is low in alcohol and high in acid is distilled, flavors must be more concentrated. Wines from Ugni Blanc are generally not very flavorful, but upon distillation are usually grapey and floral in character.

Armagnac: 10 varieties are permitted
Ugni Blanc: is still the most planted, but makes up 55% of total plantings, giving producers of this Brandy a wider range of flavor profiles to work with. The three other most important varietals for Armagnac are as follows:
Baco: The second most planted grape in Armagnac (32% of plantings) is unique to this region, as it is not permitted for Cognac production. Yielding earth, full bodied spirits reminiscent of prunes and raisins.
Folle Blanche: creates wines of floral character. The Armagnac producer, Tariquet creates a 100% Folle Blanche Armagnac, in the most planted cru: Bas Armagnac.
Colombard: contributes a spicy, peppery element to Armagnac blends.

THE CRUS: The wine growing areas in each region
Cognac: 6 crus

DISTILLATION: While all Cognac is legally required to use pot stills, most Armagnac is produced in column still, though pot still is legally allowed, and usually the highest quality Armagnac's are produced using them.
Cognac: "Charentais Stills" is the term most widely used to describe these copper pot stills legally required to use direct heating and worm tube condensers.
Armagnac: "Alambic Armagnacais" unique column stills which are perfect for making a low strength spirit. This single column still is able to be run continuously, unlike the still used for Cognac. Usually grape varieties are fermented, then distilled separately, allowing a wider variety of options for the final blend. 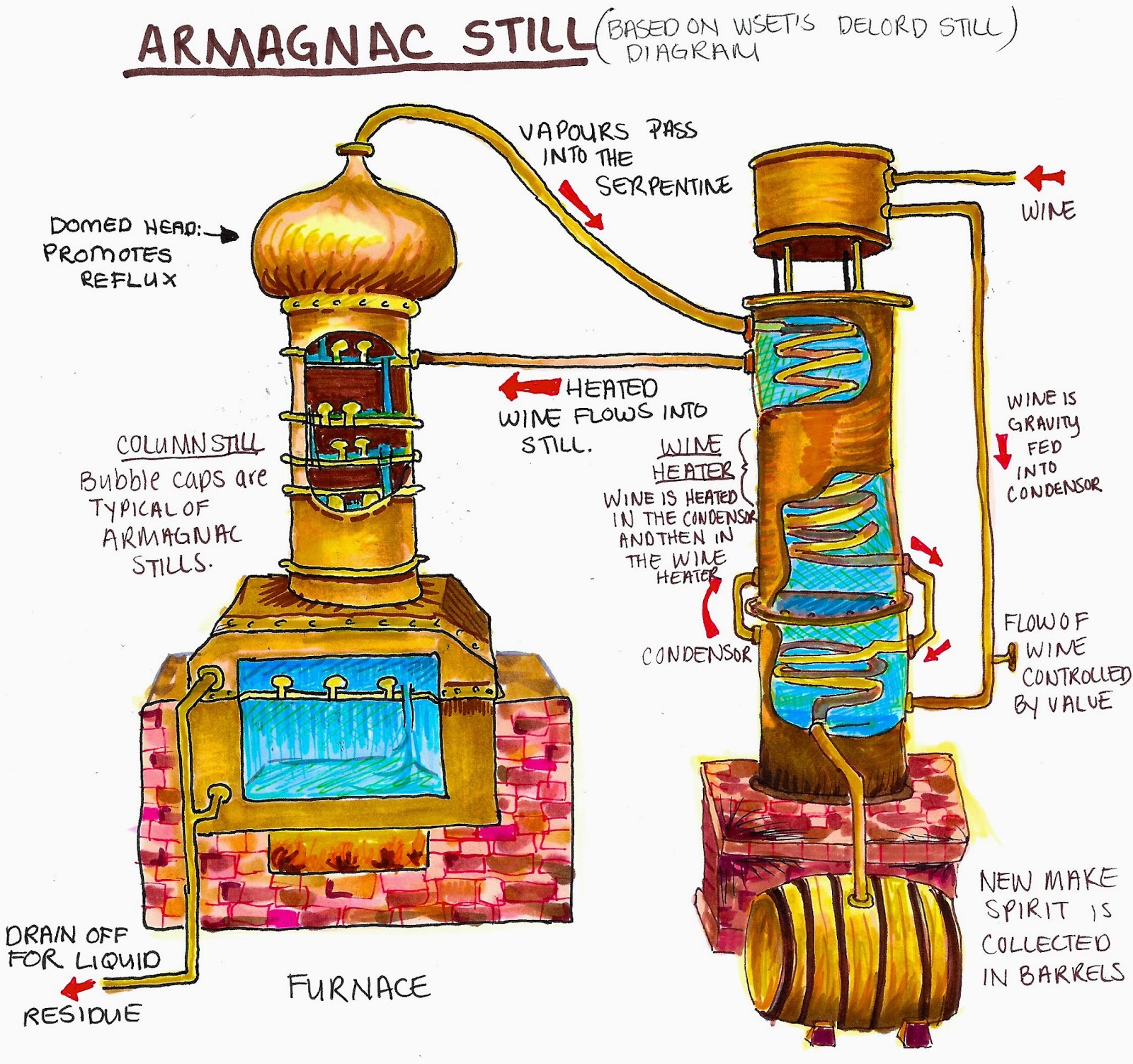 Armagnac: Generally this brandy spends a brief period of time in new oak, before being transferred to older oak where it completes the aging process. Usually European oak is used, as well as a local oak.

LABELS AND LAWS:
Both Cognac and Armagnac legally do not allow sulfur additions to the wine prior to distillation. While sulfur is commonly added to wine for a variety of antioxidant and antimicrobial reasons, if it was added to a wine destined for distillation would create a spirit with unacceptable sulfur levels post concentrating. Both also prohibit must enrichment prior to fermentation, which would create a wine out of sync with the desire for a brandy base wine to is low in alcohol and high in acid, as must enrichment enables a higher abv% after fermentation.

Terms: * Ages are based on the youngest component of the blend.

Cognac: The following four Cognac houses dominate trade: Hennessy, Martell, Rémy Martin, and Courvoisier.
Armagnac:
Brandy Cocktails:
Sidecar: This recipe is similar to one found in Jerry Thomas's 1862 book, How to mix drinks, and is also said to have originated at the famed Harry's New York Bar of Paris, after a US. Miliatary Captain arrived at the bar in a sidecar of a motorcycle. Serve in an old fashioned glass.
1 oz Brandy
1 oz Cointreau
3/4 oz lemon juice
flamed orange peel garnish

Brandy Alexander: Supposedly John Lennon's favorite drink, give this cocktail a whirl at your next booze get together! Shake brandy, créme de cacao, and heavy cream with ice, and strain into a small cocktail glass, before garnishing with a pinch of nutmeg.

Champagne Cocktail: Similar to a drink that evolved in the 1700's, this is a Cognac cockgtail is a refreshing alternative to your next glass of bubbly. Pour bitters over a sugar cube placed in the bottom of a Champagne flute, then cover with Cognac. Pour Champagne over the mix, and if you really want to get sassy - try rubbing the sugar cube on the skin of an orange for an added kick
Angosutra bitters
sugar cube
1 oz Cognac
Champagne 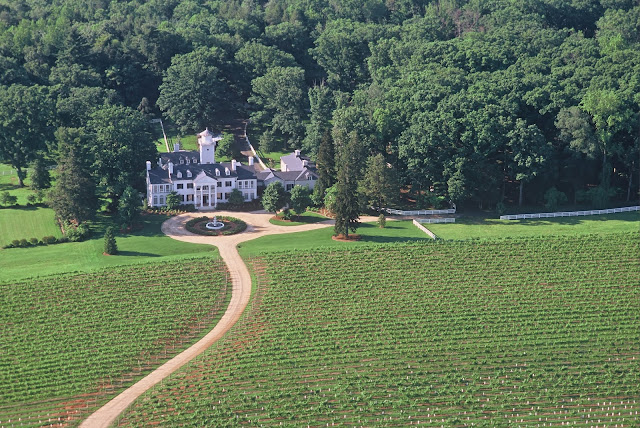 In September, a friend of mine and I set out to tackle VA wineries and without a doubt our best experience was Keswick Vineyards. 3 or 4 days before the first of the grapes were to be harvested, we had the opportunity to visit with winemaker and general manager Stephen Barnard who, like the rest of the staff at this winery, was ensured we had the best experience possible. Stephen allowed us to pick his brain for upwards of an hour, showing us around the vineyards and winery.

Keswick Vineyards was established in 2000, and after spending time in there in 2002, South African native Stephen Barnard returned in 2006, as both winemaker and general manager. With a minimal intervention approach to vinification, currently most wines ferment using yeasts naturally present on grapes at the time of harvest, and all reds are bottled un-fined and unfiltered.

Having been named one of America's Top 100 Most Influential U.S. Winemakers Stephen should also receive an award as perhaps the most welcoming and generous winemaker in Virginia.

Established: 2000
Acres: 43
Grape Varieties:
Soils: Clay shale and limestone
Elevation: Low-lying, highest point at 700 ft
Viticulture: Like most wine regions located on an east coast, Virginia struggles with high humidity and, thus an increased likelihood of disease, however an emphasis in battling this includes minimal use of fungicides and pesticides. While we were here there was a large amount of damage due to pests like squirrels and birds, and there was also grey rot present. 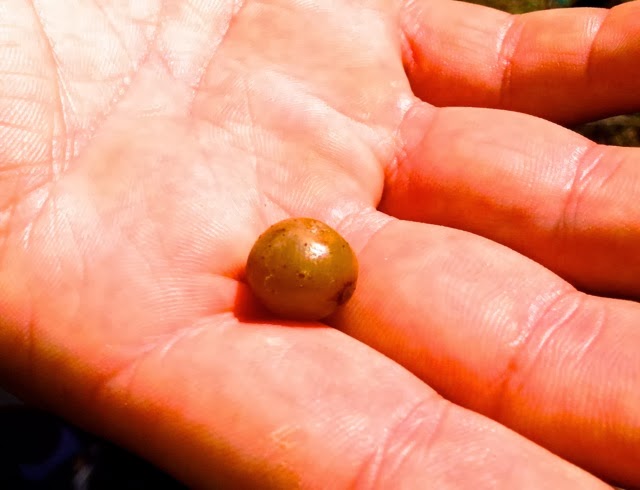 Onset of GREY ROT:
Stephen shows the tiny dots or punctures on the grape's skin
where the fungus's microscopic filaments have created an outlet through
which water may evaporate. If VA had drier, sunnier afternoons in the summer, perhaps
incredible dessert wines would be made, but because VA is damp and
humid, Noble Rot's unwanted form, Grey Rot sets in, decreasing yields and
tainting flavors.

Casually strolling the vineyard explaining his philosophy on both winemaking and grape growing, we all pull a few grapes off the vine to pop into our mouths. Suddenly Stephen spits the mangled carcass of what was a perfectly fine grape on the road to becoming a red wine into the palm of his hand. Lily and I worriedly look to each other to see if we should follow suit. Maybe something was horribly wrong with our mid afternoon snack that could result in sudden death, or had we unknowingly consumed feces? Refraining from continuing to chew as Stephen explained how he predicts the color of a wine, squeezing whats left of the grape between his palm and his thumb. 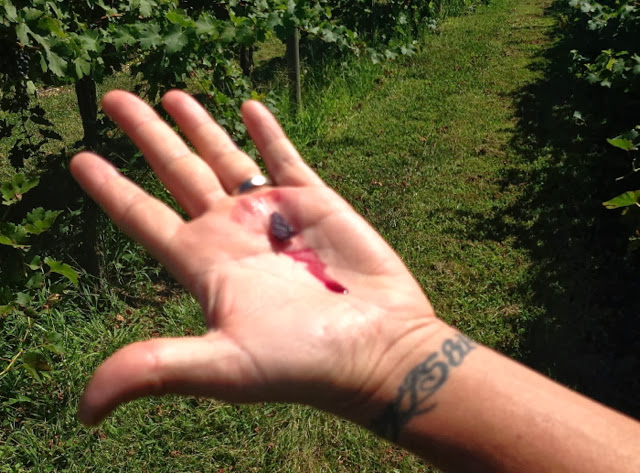 Predicting a Wine's Color in the Vineyard

Stephen explains he's trying the Ballerina vine training system, where the canopy of the vine is allowed to spread out like a too-too, increasing leaves exposure to the sun. 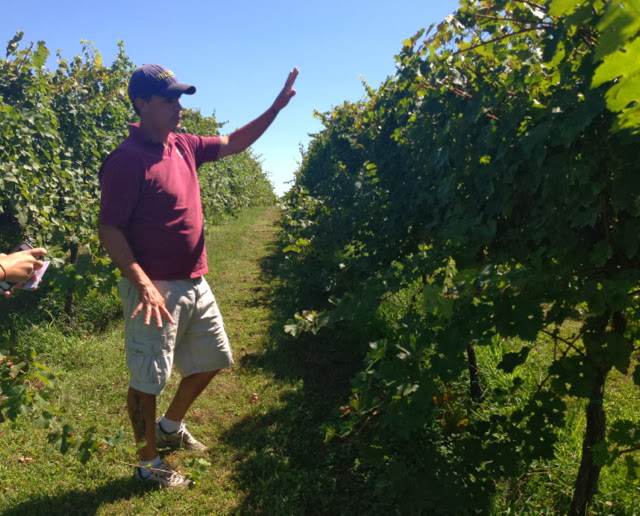 Eventually making our way into the winery Stephen shows us around. One neat thing about Keswick V.Y.'s is their involvement with their customers. With an phenomenal wine club offering a host of events, including the member's party where the final blend of Consensus is chosen. This red wine's label has the photos of all members backing the winning blend for the year, a blend entirely chosen by wine club members. You also have the opportunity to invest in a new barrel, and get a cut of the wine down the road, as well as a nifty golden plaque with your name. 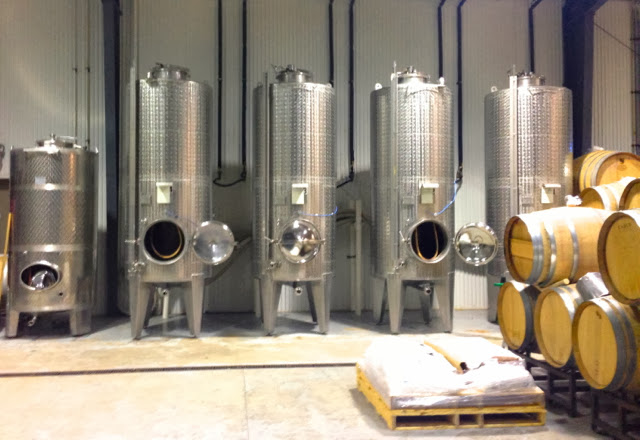 Why you need to go here:

I by no means am an expert on Virginia wine, but I have been to my fair share of wineries in my home state, and I will say that the level of enjoyment and learning the staff at Keswick deliver to guests has been unsurpassed by any other winery there as far as my experiences go, and without a doubt Keswick Vineyards is my personal favorite winery to take either someone who knows plenty about wine, or needs a boost to jump on the winery-visiting-wagon. They are also dog friendly, and when they are not too busy are happy to show you around beyond the tasting room. Also a beautiful wedding venue, Keswick Vineyards should not be missed on any trip on the Eastern Monticello Wine Trail 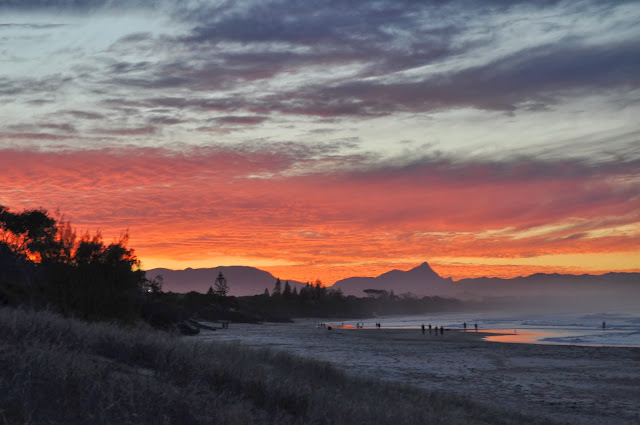 By far my favorite place I travelled on my trip to Australia. The hostel where we stayed must have required all workers to be total babes, right on an incredible beach packed with surfers, and with the views of Mt. Warning to the left, a random bizarre island popping straight out of the water in front of you, and a lighthouse to your right, this is one of those places where you'll disappear from your reality and be perfectly happy without a watch for the rest of your life. Definitely recommend this hostel, the second you walk in you're part of the gang.

From our hostel we hiked to the lighthouse on the eastern-most edge of Australia's mainland, got to see whales migrating, and watched the most ape-shit-crazy sunset I've ever seen while listening to a random collaborative jam-sesh of about 30 people who climbed in off the surf to play whatever they could get their hands on. A local on the cliff said he moved to Byron because of the insane sunsets. 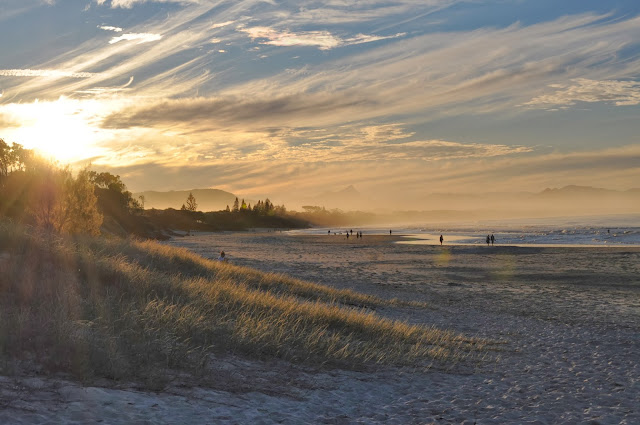 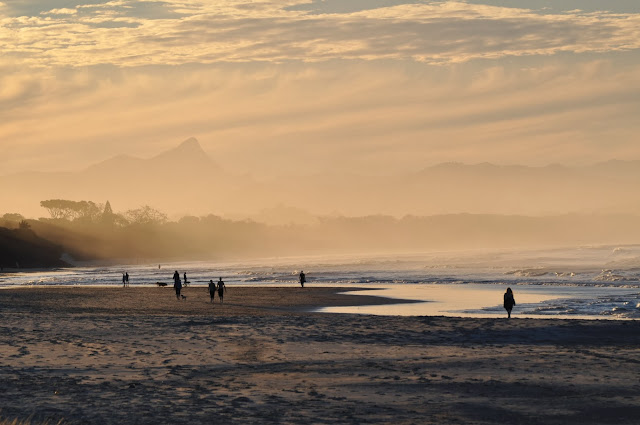